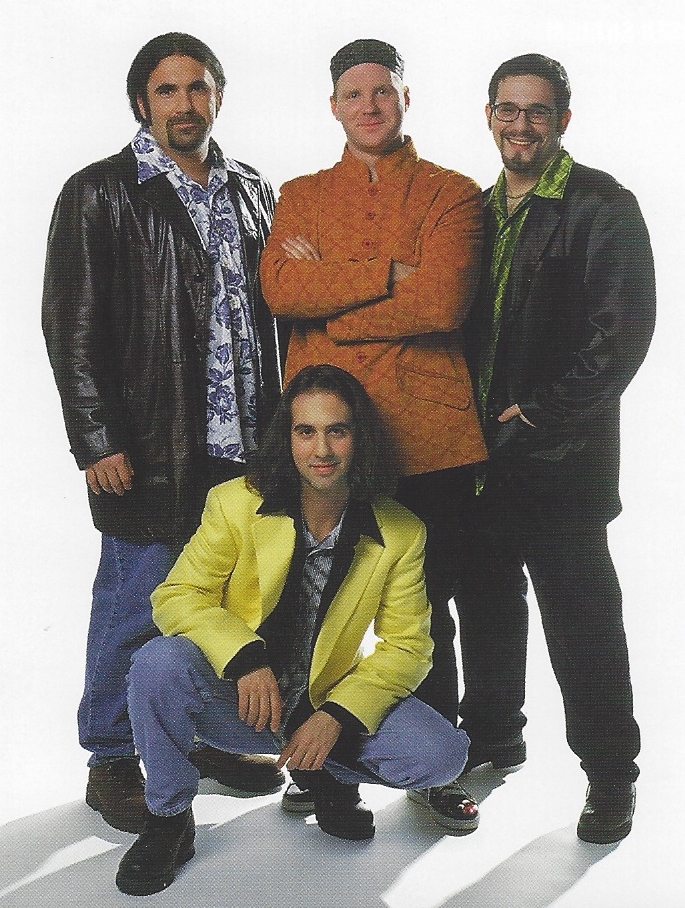 Yom Hadash (which translated, means “the new day” in Hebrew) is a Contemporary Jewish Band conceived by brothers Jon & Josh Nelson, Dave Lefkowitz & Adam Dehner (*pictured to the left) in the late 1990’s with an ambitious musical goal… to write and perform music based on ancient texts and traditions that would appeal people of all cultural backgrounds and creeds. Today, after hundreds of concerts across the nation, six full length CD releases and songs that have touched the souls of many, Yom Hadash has cemented itself as the “new day” in Jewish music. Here’s the band’s story…

1997 / The Band is Launched…A New Day in Jewish Music: Yom Hadash was the brainchild of Jon (vocals & bass guitar) and Josh (vocals & keyboards) Nelson. After a number of years performing together as an acoustic duo, they envisioned forming a band that would help to redefine World Music, while incorporating the rock, pop and other influences they loved. After Jon and Josh enlisted their close friends Dave Lefkowitz (drums) and Adam Dehner (lead guitar), the band was launched in the spring of 1997. Jon, Josh, Dave & Adam virtually camped out at Dave’s house and put together a nice set of their favorite cover songs and a CD’s worth of catchy original compositions. Later that summer, when the quartet first released and shopped their full length demo CD… “When We Were Young” (1997), the response was overwhelming! In August of ‘97 the band booked their first “national gig”… and traveled to San Antonio, TX to perform at a big music festival. It was a wonderful opportunity for the band to debut their fresh, rocking and innovative sound. They were extremely well received and sold a slew of their debut CD. It was truly an amazing start for the band.

1998-2000 / Honing our craft: This three year period was a wonderful time of growth and musical development for Yom Hadash. During this time the band built on their early success by continuing to play in communities across the United States. The buzz was definitely out there and it translated into more concerts, radio & television promotions and CD sales. Due to popular demand, the band also released two more CDs during this period. The first was a reworked & re-released version of their original demo CD “When We Were Young” (1999). Engineered and produced by the band’s drummer, Dave Lefkowitz, the lush string arrangements and other nuances really brought a new dimension to the original recordings. This revamped version of the CD became a huge seller for the band and really cemented their sound among the most innovative and recognizable in their genre. There was a definite formula and consistency to the Yom Hadash “sound” and that was evident in the band’s next full length CD release “All This Comes From You” (2001). The CD became an immediate hit and led to more touring for Jon, Josh, Dave and Adam.

2001-2002 / Bringing Back the Power Trio: It was after the 2001 release of “All This Comes From You”, that the band went through its first major change in personnel. After four years of touring with Yom Hadash, lead guitarist and Jon’s childhood friend, Adam Dehner, decided to pursue other musical and professional avenues. Given Adam’s popularity and dynamic performance style, the band decided that simply replacing him wouldn’t be the right decision at that time. Instead, Jon, Josh and Dave decided to go at it as a three piece group. Josh moved over to electric guitar, Jon remained on bass & Dave continued on the drum set. The new “three piece” guitar driven sound quickly brought the band more shows and opportunities. Their new sound was tight and progressive, and a bit different from the keyboard driven music of their previous work. It was a period of extensive touring and hotel rooms (with “two beds and a pull out sofa”).

2002 / John Dorizzi joins the fold: After a year or so of touring as a three-piece band, Dave decided he too would move on to different projects. As a recording engineer and producer, he was working with more and more clients and wanted to take some time off from touring. And then there were two! Jon and Josh put some feelers out for a drummer that would not only uphold the strong tradition and personality that Dave had established, but to also bring a new and exciting dynamic to the band. A few calls were made, and luckily, that search led to John Dorrizi. John was just coming off of a decade as an in demand professional drummer, most notably, with “Division Street” a very popular Boston based band which he co-founded. John was ready for new musical horizons, and a jam session was set up to prepare for their very first show together in Chicago later that month. The way that Jon, Josh and John clicked was very evident right from the start. Yom Hadash, as a unit, was tighter than ever and the band experimented with different styles, sounds and influences in expanding their musical horizons. This musical growth culminated in the release of their third fourth full length CD…“One” (2004), which was lauded as an “innovative and groundbreaking achievement” in Contemporary World Music.

2005-2007 / More lineup changes & The Beat Goes On!: Shortly after the release of the band’s CD “One”, Josh decided to move to New York City and pursue other musical avenues there. With Josh moving on, Jon and John D. decided, they’d ask a few different musicians they really admired to join the band on a “per gig” basis. This new idea worked out really well…. seeing that Yom Hadash had always been as much a “family” as it was a band. Jon and John D. continued to be the foundation of the band, while playing with different musicians such as Adam Dehner (returning founding member of Yom Hadash), George Simon (great musician and one of Jon Nelson’s best friends) & Johnny Simon (George’s younger brother & lead guitarist in the popular “Nuno Baker Band”). To expand upon the theme of Yom Hadash as a true “musical brotherhood”, a decade in the making, Jon Nelson decided to release a 21 song compilation representing thee band’s work from 1997-2007 titled “Take Me Back… Our Greatest Hits So Far” (2006).

2007-2012 / Mike, Ted & George Join… A New Day Once Again!: By continually expanding upon the tradition and high quality of musicianship that Yom Hadash was built in the late 1990’s, the band’s most recent lineup put the band at it’s musical and creative best. With the full time addition of Michael Gauvin Smith/Lead Guitar (The Mudhens, Bay City Rollers, The Doug Flutie Band & Studio Musician Extrordinaire), Ted Armstorng/Piano & B3 Organ (The Road Side Prophets, Walk That Walk & The Doug Flutie Band),  George Simon/Bass Guitar (Curious George, AJ Edwards Band) & Jonathan “JB” Brooks/Bass Guitar on many gigs, the band successfully moved on to new horizons and heights.

2012 – Today / “Keeping The Flame”: Jon is continuing the high quality of musicianship and showmanship that he first established with the original Yom Hadash lineup more than fifteen years ago! He’s currently touring the country with some of the best musicians on the East Coast and is the Music Specialist @ Temple Emanu-El in Marblehead, MA. Jon’s new CD “Twelve Songs” has been lauded as one of the best of 2014, and his music continues to be a major part of the Contemporary Jewish Music genre.